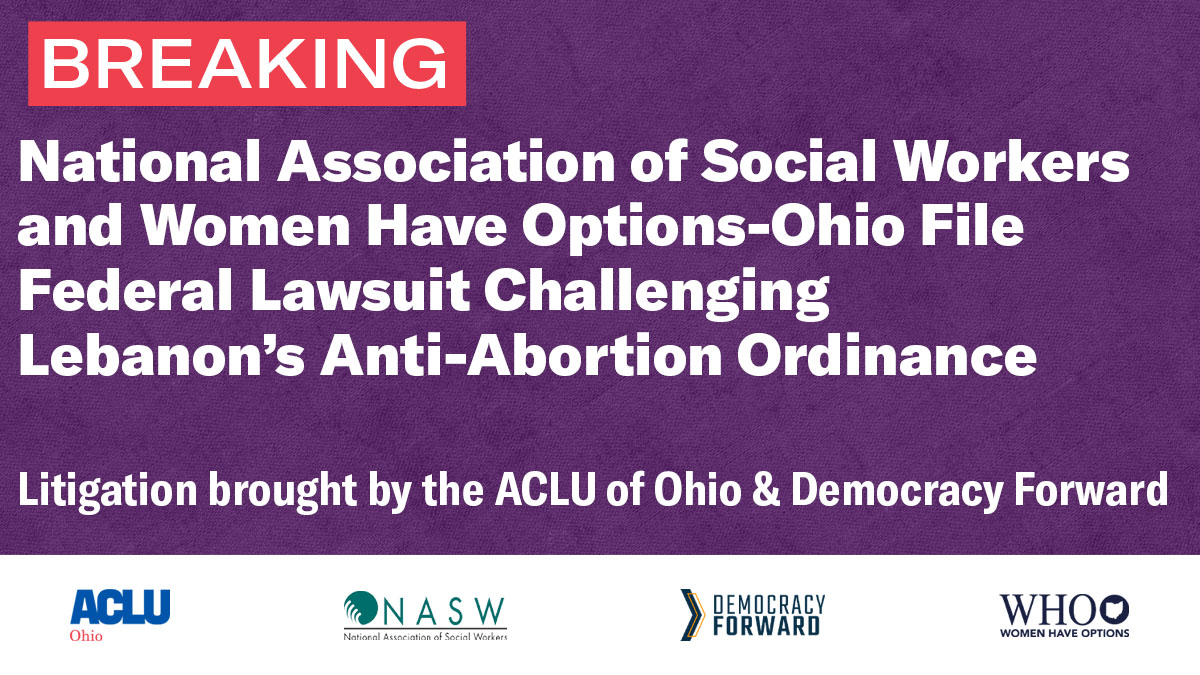 Represented by the ACLU of Ohio and Democracy Forward, we have joined the National Association of Social Workers - Ohio in filing federal suit against Lebanon's anti-abortion ordinance. Adopted nearly one year ago, the ordinance is one of nearly 40 local bans across the country, seeking to criminalize and ban abortion within city limits. Let's be clear: this ban is a grievous constitutional violation that is all-encompassing AND vague, leaving citizens enraged and baffled.

The ordinance is the only local ban currently enacted in Ohio, and while no clinics reside in city limits, the ban prohibits anyone from obtaining, facilitating, or promoting abortion even outside city limits. The vague language & scope of these prohibitions means that individuals do not have fair notice or expectation of what may be considered misconduct under this ordinance.

Enough is enough. We will not stand by idly as governments trample the rights of the citizens they supposedly serve. WHO/O's Board Chair, Jordyn Close, states, "The work we do to help people access abortion in Ohio and the Midwest helps our communities thrive. As the only statewide abortion fund, we will not be intimidated, and we are not going anywhere. We will continue to stand up to our oppressors who have launched this attack on our bodily autonomy. These attacks against abortion care are meant to stigmatize and restrict access and prevent us from supporting Ohioans. We will not be harassed or intimidated out of serving Ohio, in the courts or anywhere else. We will protect our staff, our volunteers and our donors. We are proud to fight back, and will always stand up for Reproductive Justice."

WHO/O will continue providing updates on this lawsuit as they are available. Regardless of Roe, Lebanon's ordinance is a clear violation of established constitutional rights of free speech and due process. The people of Ohio cannot and will not be subject to the whims of extremists that do not represent our state's or country's support for abortion access.

Below is the ACLU of Ohio & Democracy Forward's full release. Please direct any questions regarding the suit's specifics to the contacts listed on the release.

The groups are represented by the ACLU of Ohio and Democracy Forward.

CINCINNATI, OHIO – Today, the National Association of Social Workers (NASW) and Women Have Options – Ohio (WHO/O), represented by the ACLU of Ohio and Democracy Forward, filed a federal complaint challenging an anti-abortion ordinance adopted by the Lebanon City Council on May 25, 2021. The suit was filed in the U.S. District Court for the Southern District of Ohio. With the Supreme Court set to determine the fate of Roe v. Wade and after nearly fifty years of settled precedent with respect to the right to privacy, this lawsuit makes it clear that, regardless of that outcome, the Lebanon ordinance violates other constitutional protections–including due process and free speech.

Lebanon’s ordinance—one of more than 40 similar ordinances passed in localities around the country since 2019 and the only one currently enacted in Ohio—bans abortion and penalizes people who seek to assist those obtaining abortion care. Until now, these ordinances have been largely unchallenged in the courts.

Lebanon became the first city in Ohio to adopt this type of municipal abortion ban. Lebanon’s ordinance contains a potentially sweeping, yet undefined and vague, prohibition on any efforts to obtain or facilitate an abortion, even if the abortion takes place outside of the city limits. It further forbids “any person to knowingly aid or abet” a prohibited abortion, a proscription that includes things like “abortion doula services”–a term that is also left vague and undefined. It therefore deprives the public—including both pregnant persons and those who seek to provide them with assistance—of fair notice as to what conduct is prohibited.

Under the ordinance, ordinary citizens, like NASW members and WHO/O’s employees and volunteers, must interpret and apply complex, nuanced legal concepts in order to determine whether their conduct is likely to subject them to prosecution. The vague language included in the ordinance forces NASW and WHO/O to divert additional resources to ensure they can continue to provide services to their clients and members—reallocating staff time, spending money on things like procuring legal advice, and generally trying to protect themselves and their members. In doing so, the ordinance threatens to punish social workers for doing their jobs.

Living under ordinances like the one in Lebanon is just one example of the reality millions of Americans already face every day, even though the right to an abortion remains the law of the land. The courts are now the frontline of the battleground for democracy, not the last-resort protectors of it—and the stakes for challenging wrongdoing couldn’t be higher.

“In the wake of the recent news of the Supreme Court's leaked decision overturning Roe v. Wade, it's all the more important to continue to defend abortion access and ensure that municipalities cannot criminalize lawful activity through vague, sweeping bans. The ordinance’s vagueness, coupled with its potentially sweeping breadth, render it unlawful on multiple fronts,” noted Jessie Hill, cooperating attorney for the ACLU of Ohio.

“As the nation faces increasing threats to democracy at the state and local levels, these ordinances provide a chilling glimpse of a reality that extremists seek to impose on people and communities across the country, said John Lewis, senior counsel for Democracy Forward. “These ordinances don't exist in a vacuum -- they are inextricably linked to and reinforce other threats to democratic institutions, and we will continue to hold those responsible accountable.”

“The work we do to help people access abortion in Ohio and the Midwest helps our communities thrive. As the only statewide abortion fund, we will not be intimidated, and we are not going anywhere. We will continue to stand up to our oppressors who have launched this attack on our bodily autonomy. These attacks against abortion care are meant to stigmatize and restrict access and prevent us from supporting Ohioans. We will not be harassed or intimidated out of serving Ohio, in the courts or anywhere else. We will protect our staff, our volunteers and our donors. We are proud to fight back, and will always stand up for Reproductive Justice," noted Jordyn Close, WHO/O board Chair.

“Supporting clients in their pregnancy and parenting education is a regular part of ethical, competent social work practice. Lebanon’s ‘Sanctuary for the Unborn’ ordinance has, in essence, created a criminal penalty against social workers who are simply doing their jobs. The ordinance criminalizes the “aiding and abetting” of abortion through ‘abortion doula services,’ a vague term for which no definition is provided. Social workers offer emotional, logistical, and informational support to clients who are working through their decisions around pregnancy and parenting -- including when the client chooses to seek an abortion. Social workers are obligated to abide by the standards set forth in the National Association of Social Workers’ Code of Ethics and as state-licensed professionals legally required to follow the Ohio laws and rules that stipulate that social workers are to provide support to clients in alignment with what they self-determine is in their best interest. This ordinance thus asks social workers to defy their guiding principles for practice and their ethical obligations to their client or face criminal action,” noted Danielle Smith, NASW Ohio Executive Director.

The ACLU of Ohio is a non-profit, non-partisan legal and advocacy organization working to expand civil liberties and civil rights for all people. It is a state affiliate of the ACLU Nationwide, with offices in all fifty states, plus Washington D.C. and Puerto Rico.